The One New Man

The prophets foretold that one day both Jews and Gentiles would believe and follow the Lord God of Israel and His Messiah.  Yeshua prayed that we would become one with each other as we were one with Him.  Finally, Paul called this unique people, “The One New Man.”

For He Himself is our peace, who has made both one, and has broken down the middle wall of separation, having abolished in His flesh the enmity, that is, the law of commandments contained in ordinances, so as to create in Himself one new man from the two, thus making peace, and that He might reconcile them both to God in one body through the cross, thereby putting to death the enmity.

The one new man consists of Jews and Gentiles who by God’s grace through faith in the atoning sacrifice of Yeshua have been redeemed, forgiven of sin and considered righteous before God.

But now the righteousness of God apart from the law is revealed, being witnessed by the Law and the Prophets, even the righteousness of God, through faith in Messiah Yeshua, to all and on all who believe. For there is no difference; for all have sinned and fall short of the glory of God, being justified freely by His grace through the redemption that is in Yeshua, whom God set forth as a propitiation by His blood, through faith, to demonstrate His righteousness, because in His forbearance God had passed over the sins that were previously committed, to demonstrate at the present time His righteousness, that He might be just and the justifier of the one who has faith in Yeshua.

PRAY FOR THE CHURCH TO FULFILL YESHUA’S PRAYER TO BE ONE IN HIM. 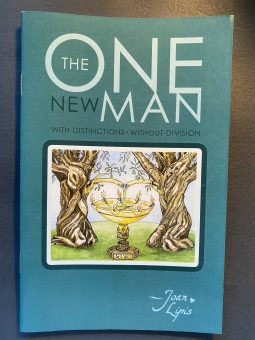