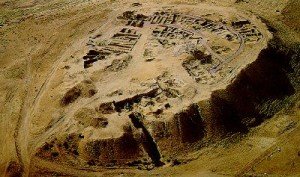 One of the most ancient and fascinating Biblical sites in Israel is “Tel Sheva” – The wall of Biblical Be’er Sheva. This was the Southern Boundary of the tribe of Judah and eventually the border of the kingdom of Judea.

Beersheba is first mentioned in Genesis chapter 26 with God’s revelation to the patriarchs. Its name is derived from the Hebrew word shevu’a (oath) or shiv’a (seven) as elaborated in Gen. 21:31 and 26:33. Beersheba symbolized the southern boundary of the Land of Israel, as in the phrase from Dan to Beersheba. (Judges 20:1; 1 Samuel 3:20; and 1 Kings 5:5)

Tel Sheva, the mound of Biblical Beersheba, is located in the northern Negev, several kilometers east of the present-day city of Be’er Sheva. The Arabic name of the mound, Tell es-Sab’a, preserves the biblical name; the archeological finds support its identification with Biblical Beersheba.

The ancient town was built on a low hill on the bank of a wadi (dry river-bed), which carries floodwater during the winter months. A close-to-the-surface aquifer along the wadi ensured the year-round supply of water.

Visitors will notice the elaborate engineering and planning that went into the ancient water system at the time. The system was connected to the Hebron stream, bringing in water through different tunnels and cisterns.

A large area of the site was excavated between 1969 and 1976, producing several layers of the remains of settlement, including fortified towns of the early Israelite period and the monarchic period of Judah, covered by remnants of small fortresses dated from the Persian to the Roman periods.

The typical four-room house, divided by pillars, from the Iron Age can also be seen at Tel Be’er Sheva.

The earliest remains of settlement at Beersheba are a number of rock-hewn dwellings (12th-11th centuries BCE) and a 20 m.-deep well supplying fresh water to the inhabitants of the first permanent unfortified settlement of Israelites of the Tribe of Simon. (Joshua 19:2)