The Seed of the woman was to have a unique birth and specific family tree.  Step one was to create a specific people from whom Yeshua would descend.

But mankind had a different agenda, an agenda that is reemerging today – a “New World Order” to unite all peoples.    The idea of world unity and peace sounds wonderful, but the motivation behind the idea is spiritual rebellion.  The reason then and now is – power – to usurp and replace God.  But only God is God.  He destroyed their plans and scattered the people by separating them into different nations, languages and cultures.

Now the whole earth had one language and one speech.  And it came to pass, as they journeyed from the east, that they found a plain in the land of Shinar, and they dwelt there.  Then they said to one another, “Come, let us make bricks and bake them thoroughly.” They had brick for stone, and they had asphalt for mortar.  And they said, “Come, let us build ourselves a city, and a tower whose top is in the heavens; let us make a name for ourselves, lest we be scattered abroad over the face of the whole earth.”

But the Lord came down to see the city and the tower that the sons of men had built.  And the Lord said, “Indeed the people are one and they all have one language, and this is what they begin to do; now nothing that they propose to do will be withheld from them.  Come, let Us go down and there confuse their language, that they may not understand one another’s speech.”  So the Lord scattered them abroad from there over the face of all the earth, and they ceased building the city.

But out of all the nations of the world, God chose Israel for a special purpose and destiny. 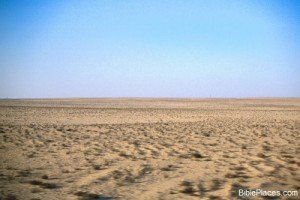