Then Samuel spoke to all the house of Israel, saying, “If you return to the Lord with all your hearts, then put away the foreign gods and the Ashtoreths from among you, and prepare your hearts for the Lord, and serve Him only; and He will deliver you from the hand of the Philistines.”

Today the “Palestinians” claim to be descendants of these ancient enemies of Israel.  Although they are not (the Philistines came from the area of the Aegean Sea), they are still committed to the destruction of Israel.

Nevertheless, God’s response to Israel is still the same – Israel’s loyal devotion to Him and Him only.

PROCLAIM THAT BOTH ISRAEL AND THE “PALESTINIANS” WILL KNOW THE PEACE OF YESHUA.

[1920 division of Palestine into two states.  According to the San Remo Conference, the entire portion was to be a Jewish homeland.] 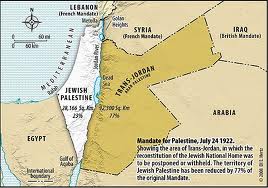