The Days of Awe

The Jewish people have a tradition called “The Days of Awe” which are the ten days between the first two fall feasts (Trumpets and Atonement). They believe that on the first day God opens two books in Heaven:

Those whose lives have been perfect over the past year are written in the Book of Life and will live for another year.  Those whose lives have been very wicked are written in the Book of Death and they will die.  For all others, during these ten days they prepare to stand before God for judgment.  According to tradition, God makes His judgment and closes the books on the last day, the Day of Atonement.

Although this tradition has no Biblical basis, it does have some good results.  But God wants truth in the deepest part of our hearts.  The truth is that God DOES have a Book of Life – for eternal life or eternal punishment.

Then I saw a great white throne and Him who sat on it, from whose face the earth and the heaven fled away. And there was found no place for them. And I saw the dead, small and great, standing before God, and books were opened. And another book was opened, which is the Book of Life. And the dead were judged according to their works, by the things which were written in the books. The sea gave up the dead who were in it, and Death and Hades delivered up the dead who were in them. And they were judged, each one according to his works. Then Death and Hades were cast into the lake of fire. This is the second death. And anyone not found written in the Book of Life was cast into the lake of fire. 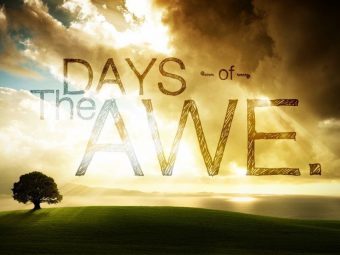