The destruction of the Temple and the Roman conquest over the Jewish people was confusing to the new Gentile church.  They questioned why God would allow such horrible things to Israel, the people and the land He had chosen.  With their limited understanding of the Hebrew prophets, they reasoned God allowed it because the Jews had rejected Yeshua.  They tried to interpret Scripture by “the facts on the ground” instead of interpreting the facts on the ground by Scripture.  As a result, they incorrectly blamed the Jewish people for Yeshua’s death. *

From then until today, there has been a terrible history of antisemitism and distortion of Scripture coming against the Jewish people even from “the predominately Gentile church” who claims the name of Yeshua,

But before all these things, they will lay their hands on you and persecute you, delivering you up to the synagogues and prisons. You will be brought before kings and rulers for My name’s sake.  But it will turn out for you as an occasion for testimony.  Therefore settle it in your hearts not to meditate beforehand on what you will answer; for I will give you a mouth and wisdom which all your adversaries will not be able to contradict or resist.  You will be betrayed even by parents and brothers, relatives and friends; and they will put some of you to death.  And you will be hated by all for My name’s sake.

While the church was persecuting all the Jews, there was one Jewish man who was persecuting just the Jewish followers of Yeshua – Saul of Tarsus later to be called by his Roman name, Paul.

57 Then they cried out with a loud voice, stopped their ears, and ran at him with one accord; 58 and they cast him out of the city and stoned him. And the witnesses laid down their clothes at the feet of a young man named Saul. 59 And they stoned Stephen as he was calling on God and saying, “Lord Jesus, receive my spirit.”

3 As for Saul, he made havoc of the church, entering every house, and dragging off men and women, committing them to prison.

Betrayal and persecution continues to pursue the Jewish people, and in fact acts of hatred are increasing around the world. Another sign of the end times.

PRAY FOR THE CHURCH TO END ALL ANTISEMITISM AND PROCLAIM THE TRUTH OF YESHUA TO ISRAEL. 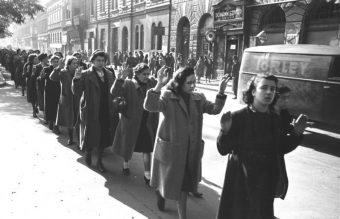