Josiah was eight years old when he became king, and he reigned thirty-one years in Jerusalem. And he did what was right in the sight of the Lord, and walked in the ways of his father David; he did not turn aside to the right hand or to the left.

For in the eighth year of his reign, while he was still young, he began to seek the God of his father David; and in the twelfth year he began to purge Judah and Jerusalem of the high places, the wooden images, the carved images, and the molded images. They broke down the altars of the Baals in his presence, and the incense altars which were above them he cut down; and the wooden images, the carved images, and the molded images he broke in pieces, and made dust of them and scattered it on the graves of those who had sacrificed to them. He also burned the bones of the priests on their altars, and cleansed Judah and Jerusalem. And so he did in the cities of Manasseh, Ephraim, and Simeon, as far as Naphtali and all around, with axes. When he had broken down the altars and the wooden images, had beaten the carved images into powder, and cut down all the incense altars throughout all the land of Israel, he returned to Jerusalem.

Righteousness is not dependent on age or status; it comes from a determination to do what is right in the eyes of the Lord.  Josiah left nothing, everything displeasing was destroyed.

PRAY THAT ISRAEL WILL TURN TO GOD WITH ALL THEIR HEART, LEAVING NOTHING DISPLEASING TO GOD. 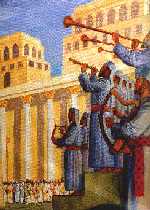