“We are all Jews”

Master Sergeant Roddie Edmonds (b. 1919) of Knoxville, Tennessee, served in the US Army during World War II.

He participated in the landing of the American forces in Europe and was taken prisoner by the Germans. Together with other American POWs, including Jews, he was taken to Stalag IXA, a camp near Ziegenhain, Germany. In line with their anti-Jewish policy, the Germans singled out Jewish POWs, and many of them on the Eastern Front were sent to extermination camps or killed. In some cases  in the west Jewish POWs were also separated from the others.

Because of this policy the US military told its Jewish soldiers that if they were captured they should destroy evidence of their faith, such as dog tags, which were stamped with the letter H for Hebrew, or personal prayer books that some soldiers carried.

It was 1945 and Edmonds had been a prisoner of war in Stalag IX-A, a German POW camp for less than a month. As the highest-ranking officer there, he was responsible for the camp’s 1,292 American POWs – 200 of whom were Jewish.

In January the Germans announced that all Jewish POWs in Stalag IXA were to report the following morning. Master Sergeant Edmonds, who was in charge of the prisoners, ordered all POWs—Jews and non-Jews alike—to stand together. When the German officer in charge saw that all the camp’s inmates were standing in front of their barracks, he turned to Edmonds and said, “They cannot all be Jews.” To this Edmonds replied, “We are all Jews.”

The German took out his pistol and threatened Edmonds, but the Master Sergeant did not waver and retorted, “According the Geneva Convention, we have to give only our name, rank, and serial number. If you shoot me, you will have to shoot all of us, and after the war you will be tried for war crimes.” The German gave up, turned around, and left the scene.
Paul Stern, one of the Jewish POWs saved by Edmonds, was taken prisoner on December 17, 1944, during the Battle of the Bulge (a German offensive campaign on the Western Front, December 16, 1944–January 25, 1945). He described how the prisoners were forced to march for four days in the bitter cold to a railway station. Some POWs died on the way. At the station they were loaded into boxcars and driven for several days, without food, to a camp near Bad Orb, Stalag IX B, where the Jewish POWs were segregated into special barracks, with lice-infested mattresses and starvation food rations. Stern and the other  Jewish  noncommissioned officers were fortunate and were taken to the nearby camp of Ziegenhain, while the other lower ranking Jewish POWs were sent to slave labor camps. It was in this second camp, Stalag IX A, where, thanks to Edmonds’s courage, Stern and the other Jewish POWs were saved from the second attempt to single out the Jewish POWs.

Stern told Yad Vashem that though he had learned German in college, he did not reveal this to the Germans; he was able to listen to what the Germans were saying without them knowing that he understood them. Stern stood near Edmonds during the exchange with the German officer. The exchange between the German and Edmonds was in English. “Although seventy years have passed,” said Stern, “I can still hear the words he said to the German camp commander.”

Another witness to the exchange was Lester Tanner, who had also been captured in the Battle of the Bulge. Tanner had been inducted into military service in March 1943 and had trained in Fort Jackson. Master Sergeant Edmonds was the highest ranking noncommissioned officer in the 422nd Infantry Regiment, and Tanner remembered him well from his training period. “He did not throw his rank around. You knew he knew his stuff, and he got across to you without being arrogant or inconsiderate. I admired him for his command.

We were in combat on the front lines for only a short period, but it was clear that Roddie Edmonds was a man of great courage who led his men with the same capacity we had come to know him in the States.” Tanner told Yad Vashem that at the time, they were well aware that the Germans were murdering the Jews. They therefore understood that the order to separate the Jews from the other POWs meant that the Jews were in great danger. “I would estimate that there were more than one thousand Americans standing in wide formation in front of the barracks, with Master Sergeant Roddie Edmonds standing in front of the formation with several senior noncoms beside him, of  which I was one.

There  was no question in my mind or that of M/Sgt Edmonds that the Germans were removing the Jewish prisoners from the general prisoner population at great risk to their survival. The US Army’s standing command to its ranking officers in POW camps is that you resist the enemy and care for the safety of your men to the extent possible. M/Sgt Edmonds, at the risk of his immediate death, defied the Germans with the unexpected consequences that the Jewish prisoners were saved.”

Chris Edmonds, Roddie’s son, told Yad Vashem that his father had kept a diary in the camp, where he also had other POWs write down their names and addresses. Food rations were very small, and the POWs were hungry, so Edmonds with some other friends planned to open a restaurant after the end of the war. Edmonds who was artistically talented, made drawings of the restaurant and sketched its logo. These plans were abandoned after his return home.
Edmonds was recruited again during the Korean War.

On January 27, 2016, a ceremony was held at the Israeli embassy in Washington DC. Israeli ambassador, Ron Dermer, and Yad Vashem Council Chairman, Rabbi Lau, presented the Righteous medal and certificate of honor to Edmund’s son.  The ceremony was attended by the President of the Untied States, Barack Obama. 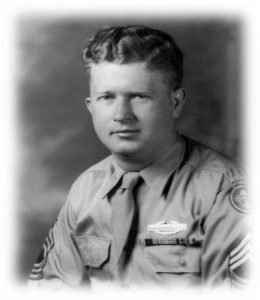