She was a devout Catholic and stemmed from a poor farming family, working since early childhood.

During the German occupation Maria Kotarba joined the local armed resistance as a courier carrying messages for the Polish partisan groups. Upon her arrest, she was sent to prison in Tarnów and then deported to Auschwitz on January 6th, 1943 as a political prisoner.

In the camp, Maria continued to work for the resistance movement as a courier. She smuggled fresh vegetables back into the camp since she worked outside growing fruit, vegetables and flowers.

One day, Maria met Lena Lakomy, a “nurse” escorting sick prisoners to the camp infirmary. Lena had been registered in the camp as a non-Jewish Pole, on account of her non-Jewish looks. One day, Maria clandestinely joined the group of sick prisoners in order to smuggle contraband medicines from the local resistance to prisoner-doctors in the infirmary. She joined Lena’s sick group often after that.

Helena Maria (Lena) Mankowska (neé Bankier), was born in Warsaw on November 20, 1922 and had lived there with her husband Symcha Mankowski. They were deported from ghetto Białystok to Auschwitz during the first Aktion that took place in the ghetto on February 5-12, 1943.

Symcha Mankowski was immediately murdered while his wife, Lena, was sent to the Women’s Camp. Polish fellow inmates working as clerks decided to report that she was a Polish political prisoner mistaken for a Jew. Although Lena managed to survive on her own for a few months she later owed her life to Maria Kotarba’s continuous help and support.

Risking her own life, Maria made her nutritious soups that allowed Lena to recover from typhus. She arranged to transfer her friend to lighter duties. Lena called Maria, “Mother”, since she was taken care of as a mother would treat her only child.

Maria continued to help Lena despite protests by Polish inmates that she should be helping a fellow Pole instead. She also helped other Jewish inmates, including Lena’s sister, Guta Scharf.

Maria and Lena were both evacuated to Ravensbrück in January 1945. One day there, Maria found Lena dying in the snow and carried her back to the barrack where she fed her. After they were both liberated by the Red Army on May 2nd, 1945 in a sub-camp of Neustadt-Glewe, Maria protected Lena from sexual assaults by the soldiers.

Maria Kotarba then returned to Poland, while Lena made her way to Paris, where she met a recently liberated Polish Army officer, Władysław Łakomy. They married in Paris in December 1946 and moved to England in late 1947, where they lived first in Middlesbrough and later in London.

Despite Lena’s efforts to locate Maria she only succeeded in gaining some information in 1997 after a special appeal was broadcast in Poland in the television program, “Dopóki żyje ostatni świadek” (As Long as the Last Witness Lives). She found out that Maria Kotarba had died of cancer in Owczary near Nowy Sącz (Gorlice County) in 1956.

In April 1997, Lena traveled to Poland to visit her grave. On September 18, 2005, Yad Vashem recognized Maria Kotarba as Righteous Among the Nations. 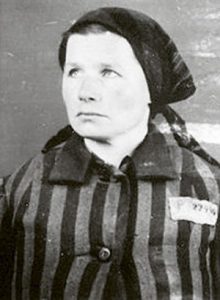