Peshev was a man that, like many others, had come under the spell of the totalitarian experiences in the 20th Century Europe. He was a democrat, but had become convinced, little by little, – and fooled himself with this firm belief – that an authoritarian regime without parties could solve the problem of corruption and decay in politics.
He became a supporter of the alliance with the Nazi Germany, and was not so much attracted by Hitler himself, as, rather, by the persuasion that Germany could give back to his country the regions which were “unjustly” lost during the ill-fated Balkan wars in 1912-13. For this reason he had little or no qualms when the Germans asked Bulgaria to approve the racial laws.

On the day of the discussion in Parliament, Peshev was the chairman of the session. He did not utter a word against the laws, even though his closest childhood friends were Jewish. He truly believed that those restrictive measures were nothing but a petty and temporary provision, and that everything would eventually be disregarded.
He could not imagine, at that time, the real consequences: the Nazis would soon have demanded that all the Jews were handed over to them.

Peshev went on leading his sophisticated life in his aristocratic milieu, when one morning he suddenly received the visit of a friend of his he had not seen for years: the man was in despair. He was an old Jewish schoolmate of his coming from Kyustendil, a charming little town on the border with Macedonia, in which Peshev had lived up to his teens.
His friend informed him that the Government had reached an agreement with the Germans and therefore the secret deportation of the Jewish minority was settled for the following day. The trains were ready in the stations. The following night the Jews were to be arrested and taken on the wagons to leave for Poland. (The then unknown destination was Auschwitz).

It was the 7th of March 1943. Everything was secretly decided in order not to alarm the population. Peshev had indeed heard strange rumours, but, just like many others, did not worry about them. Now this friend of his who was asking him to help made Peshev startle. His conscience was stirred. He was shaken out of his torpor and acted instinctively: at first he only thought about saving his Kyustendil friends. He was not aware that he was actually about to save a whole people.
He rushed into Parliament, gathered a few other members, and bursted by surprise into the office of Gabrovski, the Minister of the Interior. After a dramatic argument, Peshev forced him to withdraw the order of the Jews deportation.
He then personally called all the prefect’s offices to make sure that the counterorder was actually obeyed.

In this way deportation was only postponed: Peshev decided then to launch an attack in Parliament. He was now aware that not only the life of a few friends was in danger, but the rescue of fifty-thousand Bulgarian Jews depended upon him. There was no time to be lost: he wrote down an extremely hard letter of protest and collected the signatures of about forty members of Parliament to plead the Government and the King not to commit such a dreadful crime that would have disgraced Bulgaria for ever.
This rebellious act costed him dear: he lost his office in Parliament and lived always in danger of being handed over to the Germans, should they have won the war.
However he reached his aim: his condemnation had a disruptive effect that nobody would have expected. The King began to back out: maybe ha was feeling ashamed of himself and of what was happening, and the whole country rose up in favour of the Jews.

THE KING suddenly died in August 1943. Peshev rediscovered democratic values and fought for a political change in the country and for the re-alignment of Bulgaria with the Western World.
He made a “great mistake”, though: he publicly condemned in Parliament the behaviour of the partisans, who were giving the country over to the Russians. This as well costed him very dear when Bulgaria was occupied by the Red Army.

Peshev was brought to trial with the double charge of being an anti-Semite and anti-Soviet. During the trial – which is entirely described and reconstructed in the book – the prosecution even hinted that Peshev had saved the Jews in exchange for money. It was definitely proved wrong by his Jewish friends who came on purpose from Kyustendil to defend him.
The Court was all the same willing to condemn him to death, as happened to twenty other members of Parliament who had signed his letter of protest. There was a little miracle, however: Peshev’s defending Counsel – who by the way bore my father’s name, Joseph Nissim Yasharoff – pulled the so-called rabbit out of the top hat and reminded the Court that in 1936, when Peshev was Minister of Justice, he had saved Damian Velchev from a death sentence. Velchev was the new Minister of War, the author of the communist coup d’état upon the arrival of the Red Army.

Peshev was thus condemned to 15 years of inprisonment only, and was released after one year. He was spared the gulag only thanks to the intervention of a neighbour who was responsible for the Communist cell of the area. Peshev had in due time prevented his dismissal from his job.
After the war Peshev lived forgotten by everybody. In 1949 the Jews left Bulgaria en masse for Israel. During the sixties, once emigration difficulties had been overcome, they started to try and aid the man who had saved them: Peshev received both money and letters that thanked him for his deed regularly.
Somebody offered him to go to Israel. Peshev refused: he wanted first to be rehabilitated in his own country. He did not live long enough to satisfy his desire. 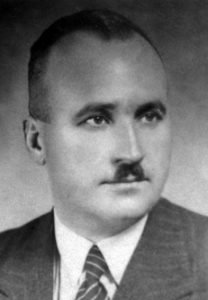