Anna Igumnova was born in Russia into an aristocratic family. In 1917, she and her husband left for a vacation in Europe and could not return home when the October Revolution started. The October Revolution was followed by the Russian Civil War and the creation of the Soviet Union in 1922. Anna received her Ph.D. in chemistry in Berlin, and then moved with her family to Slovakia. The Igumnovs had one daughter, who had stayed with her nanny in Russia and was reunited with her mother only after several years, and one son, born in Slovakia. Anna’s husband committed suicide in the late 1920s.

From the mid-1930s Anna lived in Piešt′any, a famous spa town, working in the research institute there. In 1942, a new colleague joined the institute, Alice Winter née Tandlich from Bratislava. Although Jewish, Alice was given “exception papers” because she shared in a secret prescription for the treatment of rheumatic disease. Alice arrived with her 11-year-old daughter, Erika; her younger daughter Kathryn had moved to live with Alice’s sister in another part of the country and her husband had left Bratislava for England in late August 1939. The family was supposed to follow him but the war started and the Slovakia’s borders were closed.

Germany occupied Slovakia following the Slovak national uprising. With Soviet troops approaching the country’s borders, the deportations of Slovakian Jews resumed on September 30, 1944. It was then that Anna became actively involved in helping her Jewish acquaintance.

She found a room in an abandoned hotel with a bath sunken in the floor, and took Alice and her daughter there. They would sit in the sunken bath during the day, so that no one could see them through the broken windows. Every night Anna would visit them, bringing a warm meal, books and the news. She would then go to other people who needed her care. The Winters remained in that hiding place for three months, at which point, Anna moved them to the mountains. Alice joined the partisans, while a peasant family accepted Erika for payment. Every other week, Anna would go to the village to pay the peasants – she received money from wealthy friends who supported Anna in her efforts to save Jews.

In April 1945, the Red Army entered Piešt′any and the Jews were free. Alice was then reunited with her daughters and later, in 1946, they immigrated to the USA, where Alice’s husband was already waiting for them. The survivors corresponded with Anna Igumnova until her death in the late 1980s. 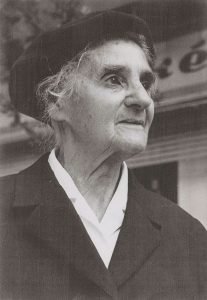 On October 19, 2010, Yad Vashem recognized Anna Igumnova as Righteous Among the Nations.