“And the Lord heard the sound of your words, and was angry, and took an oath, saying, ‘Surely not one of these men of this evil generation shall see that good land of which I swore to give to your fathers, except Caleb the son of Jephunneh; he shall see it, and to him and his children I am giving the land on which he walked, because he wholly followed the Lord.’”

Twelve men were sent to spy the land.  Only two returned with a positive report and encouraged Israel to believe God.   But instead the people listened to the negative report of the other ten spies and became too afraid.

PRAY ISRAEL FOLLOWS GOD WITH A WHOLE HEART AND BELIEVES HIS PROMISES.

[The Pinnacle of the Temple] 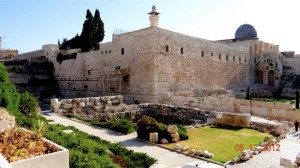