Then they cried out to the Lord in their trouble,  and He saved them out of their distresses.  He sent His word and healed them;  and delivered them from their destructions.

Oh, that men would give thanks to the Lord for His goodness,  and for His wonderful works to the children of men!  Let them sacrifice the sacrifices of thanksgiving,  and declare His works with rejoicing.

The fool is one who continues in transgression and iniquity and will be drawn to the gates of death.

The word translated “transgression” פֶּשַׁע [peh shah) means “rebellion against God”.  The word translated “iniquity” is עָוֹן (ä·vōn) means “perversity” and “depravity”.  But there is always a way to turn around – crying to the Lord.  We’ve seen the word translated as “saved” before.  It is the Hebrew word יֹושִׁיעֵֽם which comes from the root יָשַׁע from which we get the Hebrew name for Jesus–Yeshua (ישוע).  Jesus brings freedom from transgression, iniquity, sin and all our distresses.

PRAY THAT ISRAEL WILL CALL UPON YESHUA TO SAVE HER FROM ALL HER SIN AND DISTRESSES. 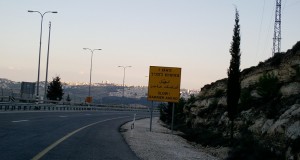 Warning of check point at entrance to Jerusalem.