-The Symbol of Light

There was a full moon the day Israel left Egypt.  But the pillar of fire of God gave them light and protection.

To commemorate God as light, huge menorahs (candelabras) were erected and lit for the eight days of the celebration.

PRAY FOR THE PEACE OF JERUSALEM AS ISRAEL CELEBRATES YESHUA, THE LIGHT OF THE WORLD. 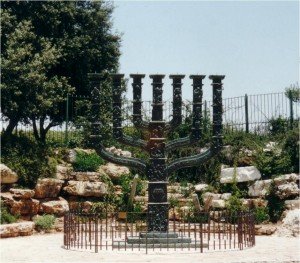 The Knesset Menorah, situated on the edge of the Rose Garden across from the Knesset building, is the work of the Jewish-English artist of German origin Benno Elkan (1877 – 1960). The Menorah is molded of bronze and resembles the menorah (7-branched candelabra) of the Temple, which has come to be a Jewish symbol. The sculpture is 4.30 meters high, 3.5 meters wide, and weighs 4 tons. The main theme of the work depicts the spiritual struggles of the Jewish people and it is engraved with the passage “Not by strength and not by power, but by my Spirit, says the Lord who rules over all” (Zechariah 4, 6). The Menorah includes engravings of biblical figures and events from the tradition and history of the Jewish people. The engravings on the six side branches of the Menorah portray the fate of the Israeli people since it was exiled from its land, and the engravings on the center branch portray the people’s fate since the beginning of the return to the land up to the establishment of the State of Israel.