The Rapture: It’s Nothing New

The Rapture is more than a doctrine, the Bible calls it “the blessed hope” God’s promises to His children.  The promise is extended to both Jews and Gentiles who have been redeemed by His grace through faith in Yeshua.

So what is “the Rapture?”

While it’s called by many terms, the rapture is God’s gathering (taking away, catching up) His followers to separate (deliver, protect) them from His judgement of the earth.

Who are “His followers,” those who have accepted God’s offer of redemption by His grace through faith in the sacrificial atonement of Yeshua and whose name is written in the Book of Life.

Being “snatched away” by God is not something new but it is quite rare. According to the Biblical record, Enoch was the 6th generation after Adam when God “took him.”

And Enoch walked with God; and he was not, for God took him.

The second time God did that was thousands of years later when He sent a fiery chariot to take Elijah from earth and bring him to Himself.

And so it was, when they had crossed over, that Elijah said to Elisha, “Ask! What may I do for you, before I am taken away from you?”

Elisha said, “Please let a double portion of your spirit be upon me.”

So he said, “You have asked a hard thing. Nevertheless, if you see me when I am taken from you, it shall be so for you; but if not, it shall not be so.”  Then it happened, as they continued on and talked, that suddenly a chariot of fire appeared with horses of fire, and separated the two of them; and Elijah went up by a whirlwind into heaven.

The timing of the Rapture continues to be debated. While there are several possible options, I believe there is more validity that it could happen at any moment, that it is imminent.

PRAISE AND THANK GOD FOR HIS BLESSING OF THE RAPTURE. 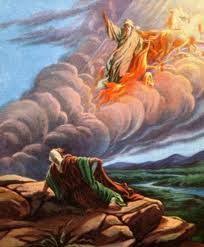