The Covenant with Death (Part 2)

Israel is unlike any other nation because of the covenants God made with Abraham and then later with David.  Israel, the people and the land, are His firstborn and are blessed with a unique relationship with privileges and responsibilities.

Israel must have been facing a situation she felt was overwhelming.  So instead of turning to God she often made a covenant with those she hoped would protect her.  The result was never what she hoped!

God was being facetious as He confronted Israel.

Therefore hear the word of the Lord, you scoffers, who rule this people in Jerusalem! Because you have said,

“We have made a covenant with death and with Sheol we have an agreement, when the overwhelming whip passes through it will not come to us, for we have made lies our refuge, and in falsehood we have taken shelter.”

“Therefore” thus says the Lord God,
‘Behold, I am the one who has laid as a foundation in Zion, a stone, a tested stone, a precious cornerstone, of a sure foundation: Whoever believes will not be in haste.

‘And I will make justice the line, and righteousness the plumb line; and hail will sweep away the refuge of lies, and waters will overwhelm the shelter.

‘Then your covenant with death will be annulled, and your agreement with Sheol will not stand; when the overwhelming scourge passes through,
you will be beaten down by it. As often as it passes through it will take you;
for morning by morning it will pass through, by day and by night;
and it will be sheer terror to understand the message.’” (ESV)

Unfortunately, in the very near future, Israel will once again be lured into making a covenant for peace which will at first seem perfect but ultimately lead to great devastation.

PRAY FOR ISRAEL TO BEWARE OF A COVENANT THAT SEEMS GOOD BUT COULD LEAD TO THE COVENANT OF DEATH. 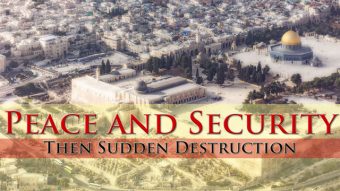