God is very silent regarding the exact timing and chronology of His plans for the “Grand Finale of His plan of redemption. God alone knows His calendar although there are many who insist otherwise.

“The secret things belong to the Lord our God, but those things which are revealed belong to us and to our children forever.

[The order of the events in “The Preface” is the writer’s suggestion of the chronology leading up to the Tribulation. I believe it’s important to understand the impact of the events, but the order and timing can be very different.  What’s important is that you live with discernment, expectation and faith.]

Israel is very accustomed to war, but there is a specific war which has great end-times significance that is looming on her horizon.

God gave His prophet Ezekiel an exact prophesy of that war which will study over the next few days.    The nations who will come against Israel are clearly defined even by their ancient names. The keys to this war are:

Ezekiel gives us very clear hints to this war and over the last few years, more of the pieces have been identified making this a very real and immediate situation today.

The alliance of nations has just been completed in the last few years.  Turkey was and is the key player.

“Son of man, set your face against Gog, of the land of Magog,  the prince of Rosh Meshech (Turkey), and Tubal, and prophesy against him, and say, ‘Thus says the Lord God: “Behold, I am against you, O Gog, the prince of Rosh, Meshech, and Tubal.  I will turn you around, put hooks into your jaws, and lead you out, with all your army, horses, and horsemen, all splendidly clothed, a great company with bucklers and shields, all of them handling swords.  Persia,  Ethiopia, and Libya are with them, all of them with shield and helmet;  Gomer and all its troops; the house of Togarmah from the far north and all its troops—many people are with you.

PRAY FOR ISRAEL AND THE NATIONS TO BE READY FOR THE JUDGEMENT OF THE LORD. 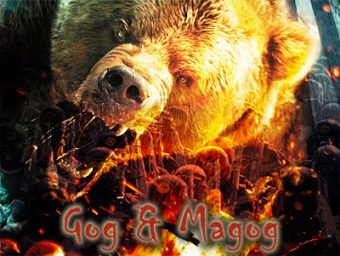 Gog: leader of the alliance, Russia