Understanding prophesy is like putting together a 5,000+ piece jigsaw puzzle; you must first have the end result picture.  If you don’t have that picture, all you can really do is find the four corner pieces, and then you would need extreme patience. The more pieces that are put in place, the easier the task becomes and thus the process moves faster.

As we resume our journey into the End Times, we will consider several topics which are like those puzzle pieces, they seem to be just fragments.  Fortunately, we have the end result picture so we know where these pieces belong.

Albeit the picture is relatively fuzzy regarding the exact timing so we need to look for the hints along the way. Discerning these hints will help us stand firm in faith when the situations around us get more tumultuous.

The first of these fragments will be the rise of a world leader.

This isn’t a new concept, actually it goes back to Nimrod who tried to replace God. But the concept of a one world governance reemerged after the ferocity of World War1, as Western leaders began to consider making a global alliance and organization that would solve all problems peacefully.

Winston Churchill said, “Unless some effective world super government can be brought quickly into action, the proposals for peace and human progress are dark and doubtful.”

God gave Daniel visions, hints of the alliances that will be built along the way.

And the fourth kingdom shall be as strong as iron, inasmuch as iron breaks in pieces and shatters everything; and like iron that crushes, that kingdom will break in pieces and crush all the others.  Whereas you saw the feet and toes, partly of potter’s clay and partly of iron, the kingdom shall be divided; yet the strength of the iron shall be in it, just as you saw the iron mixed with ceramic clay.  And as the toes of the feet were partly of iron and partly of clay, so the kingdom shall be partly strong and partly fragile. As you saw iron mixed with ceramic clay, they will mingle with the seed of men; but they will not adhere to one another, just as iron does not mix with clay.

PRAY FOR DISCERNMENT RECOGNIZE THE DANGER OF THE ONE WORLD GOVERNMENT 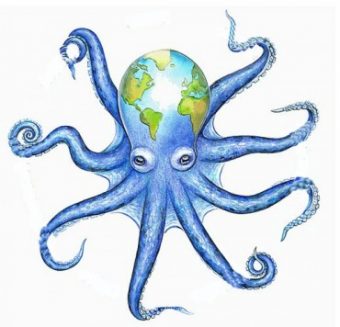