Daniel is the most prolific of the prophets regarding the antichrist.

I was considering the horns, and there was another horn, a little one, coming up among them, before whom three of the first horns were plucked out by the roots. And there, in this horn, were eyes like the eyes of a man, and a mouth speaking pompous words.

Note that in this vision, Daniel gives a better description of his character and actions

9And out of one of them came a little horn which grew exceedingly great toward the south, toward the east, and toward the Glorious Land.

23 “And in the latter time of their kingdom,
When the transgressors have reached their fullness,
A king shall arise,
Having fierce features,
Who understands sinister schemes.
24His power shall be mighty, but not by his own power;
He shall destroy fearfully,
And shall prosper and thrive;
He shall destroy the mighty, and also the holy people.

When the anti-messiah strengthens the covenant which we suggest will be written at the end of the Ezekiel 38 war,* this will mark the beginning of the 7th Week of Daniel, or the Tribulation when he will take power, and betray the Jewish people.

Then he shall confirm a covenant with many for one week;
But in the middle of the week
He shall bring an end to sacrifice and offering.
And on the wing of abominations shall be one who makes desolate,
Even until the consummation, which is determined,
Is poured out on the desolate.”

Daniel’s 5th and final prophesy was partially fulfilled by Antiochus IV.  This one will not come by force, but by diplomacy, thus deceiving many.

“There shall arise in his place one who imposes taxes on the glorious kingdom; but within a few days he shall be destroyed, but not in anger or in battle.  And in his place shall arise a vile person, to whom they will not give the honor of royalty; but he shall come in peaceably and seize the kingdom by intrigue.

The lawless one, empowered by Satan will be Israel’s worst enemy and worst nightmare.

“So he shall return and show regard for those who forsake the holy covenant. 31 And forces shall be mustered by him, and they shall defile the sanctuary fortress; then they shall take away the daily sacrifices, and place there the abomination of desolation. Those who do wickedly against the covenant he shall corrupt with flattery; but the people who know their God shall be strong and carry out great exploits. 33 And those of the people who understand shall instruct many; yet for many days they shall fall by sword and flame, by captivity and plundering. Now when they fall, they shall be aided with a little help; but many shall join with them by intrigue. And some of those of understanding shall fall, to refine them, purify them, and make them white, until the time of the end; because it is still for the appointed time.

“Then the king shall do according to his own will: he shall exalt and magnify himself above every god, shall speak blasphemies against the God of gods, and shall prosper till the wrath has been accomplished; for what has been determined shall be done. He shall regard neither the God of his fathers nor the desire of women, nor regard any god; for he shall exalt himself above them all.

This will be the time that God and all His prophets warned Israel about; His word still shouts the warning as well as His offer of salvation and redemption.

PRAY FOR THE JEWISH PEOPLE TO HEAR AND HEAD GOD’S WARNING OF THE DANGER TO COME. 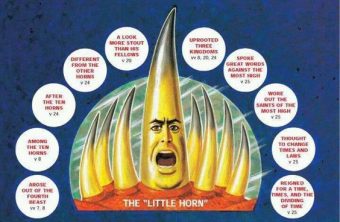 *Note, We reiterate that the timelines given here are ONLY suggestions.

We try to give our rational for the suggestions, but while we will listen to alternate positions,

we will not enter into any discussions or arguments.