Daniel had many names for the antichrist.  In his 70-week prophesy he was very cryptic but some prophesy teachers suggest Daniel was referring to “The Assyrian” who appears in other places.

And the people of the prince who is to come
Shall destroy the city and the sanctuary.

The people who destroyed the city and sanctuary in 70 AD were from the Roman Empire which included Greece and Spain, the North African coast, much of the Middle East, modern-day France, and even the remote island of Britain. It would not be necessary for the Ancient Roman Empire to rejuvenate itself as the lawless one could come from one of the modern countries that date back to the first century.

God sent The Assyrian to dispense His judgment on Israel. But as so often happens, God’s tool of judgement was under the influence of Satan and went too far.

“Woe to Assyria, the rod of My anger
And the staff in whose hand is My indignation.
I will send him against an ungodly nation,
And against the people of My wrath
I will give him charge,
To seize the spoil, to take the prey,
And to tread them down like the mire of the streets.

Yet he does not mean so,
Nor does his heart think so;
But it is in his heart to destroy,
And cut off not a few nations. For he says,
‘Are not my princes altogether kings?
Is not Calno like Carchemish?
Is not Hamath like Arpad?
Is not Samaria like Damascus?
As my hand has found the kingdoms of the idols,
Whose carved images excelled those of Jerusalem and Samaria,
As I have done to Samaria and her idols,
Shall I not do also to Jerusalem and her idols?’ ”

Therefore it shall come to pass, when the Lord has performed all His work on Mount Zion and on Jerusalem, that He will say, “I will punish the fruit of the arrogant heart of the king of Assyria, and the glory of his haughty looks.”

The fate of the Assyrian is recorded in Micah

PRAY FOR THE CHURCH TO TEACH ESCHATOLOGY* SO THAT BELIEVERS WILL BE DISCERNING OF THE SIGNS OF THE TIMES. 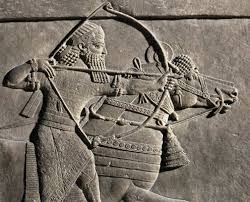 Note: Eschatology is the study of ‘end times.’