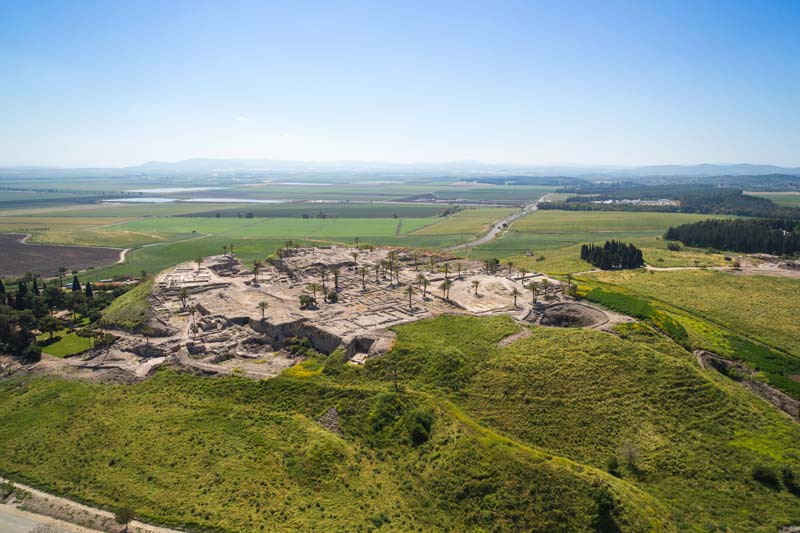 Megiddo (Hebrew: מגידו‎; Arabic: مجیدو‎, Tell al-Mutesellim, “The Tell of the Governor”) is a tell in northern Israel near Kibbutz Megiddo, about 30 km south-east of Haifa, known for its historical, geographical, and theological importance, especially under its Greek name Armageddon. In ancient times Megiddo was an important city-state. Excavations have unearthed 26 layers of ruins, indicating a long period of settlement. Megiddo is strategically located at the head of a pass through the Carmel Ridge overlooking the Jezreel Valley from the west.

Megiddo was a site of great importance in the ancient world. It guarded the western branch of a narrow pass and trade route connecting Egypt and Assyria. Because of its strategic location, Megiddo was the site of several historical battles. The site was inhabited from approximately 7000 BCE to 586 BCE though the first significant remains date to the Chalcolithic period (4500–3500 BCE). Megiddo’s Early Bronze Age I (3500–3100 BCE) temple has been described by its excavators as “the most monumental single edifice so far uncovered in the EB I Levant and ranks among the largest structures of its time in the Near East.”[2] The first wall was constructed in the Early Bronze Age II or III period.

However, the town experienced a decline in the Early Bronze-Age IV period (2300–2000 BCE), but the city was somewhat revived around 2000 BCE. Following massive construction, the town reached its largest size in the Middle Bronze-Age, at 10–12 hectares. Though the city was subjugated by Thutmose III, it still prospered, and a massive and incredibly elaborate palace was constructed in the Late Bronze Age. The city was destroyed around 1150 BCE, and the area was resettled by what some scholars have identified as early Israelites, before being replaced with an unwalled Philistine town. When the Israelites captured it, though, it became an important city, before being destroyed, possibly by Aramaean raiders, and rebuilt, this time as an administrative center for Tiglath-Pileser III’s occupation of Samaria. However, its importance soon dwindled, and it was finally abandoned around 586 BCE.[3] Since that time it has remained uninhabited, preserving ruins pre-dating 586 BCE without settlements ever disturbing them. Instead, the town of Lajjun (not to be confused with the el-Lajjun archaeological site in Jordan) was built up near to the site, but without inhabiting or disturbing its remains.

Megiddo is mentioned in Ancient Egyptian writings because one of Egypt’s mighty kings, Thutmose III, waged war upon the city in 1478 BCE. The battle is described in detail in the hieroglyphics found on the walls of his temple in Upper Egypt.

Mentioned in the Bible as “Derekh HaYam” or “Way of the Sea,” it became an important military artery of the Roman Empire and was known as the Via Maris.