Now the Lord sent you on a mission, and said, ‘Go, and utterly destroy the sinners, the Amalekites, and fight against them until they are consumed.’ Why then did you not obey the voice of the Lord? Why did you swoop down on the spoil, and do evil in the sight of the Lord?”

And Saul said to Samuel, “But I have obeyed the voice of the Lord, and gone on the mission on which the Lord sent me, and brought back Agag king of Amalek; I have utterly destroyed the Amalekites. But the people took of the plunder, sheep and oxen, the best of the things which should have been utterly destroyed, to sacrifice to the Lord your God in Gilgal.”

“Has the Lord as great delight in burnt offerings and sacrifices,  as in obeying the voice of the Lord?  Behold, to obey is better than sacrifice,  and to heed than the fat of rams.

For rebellion is as the sin of witchcraft,  and stubbornness is as iniquity and idolatry.  Because you have rejected the word of the Lord,  He also has rejected you from being king.”

Because of Saul’s disobedience the Amalekites are still a threat to Israel even to this day.  We cannot compromise when following the Lord’s instructions.

This also applies to the instruction, “Without sacrifice there is no forgiveness of sin.”  God wasn’t saying that sacrifice is no longer necessary but that it had to be accompanied by obedience.

PRAY ISRAEL WILL RECOGNIZE THE DEATH OF YESHUA WAS THE FINAL AND ULTIMATE SACRIFICE FOR RIGHTEOUSNESS.

The view north from Samaria 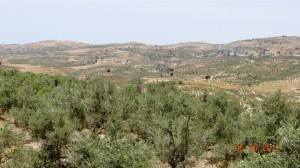