Lord, in trouble they have visited You,  they poured out a prayer when Your chastening was upon them.

As a woman with child Is in pain and cries out in her pangs,  when she draws near the time of her delivery,  so have we been in Your sight, O Lord.

We have been with child, we have been in pain;  we have, as it were, brought forth wind;  we have not accomplished any deliverance in the earth,  nor have the inhabitants of the world fallen.

God chose Israel to be His witness.  Through years of rebellion, she is a messenger who has forgotten the message.  But God is faithful to preserve a remnant.  Yeshua came from that remnant and has accomplished deliverance in the earth.

PROCLAIM ISRAEL WILL FULFILL HER DESTINY AND BRING THE GOSPEL OF YESHUA TO THE WORLD.

[Oren Almog, who was ten years old at time of the Maxim restaurant suicide bombing, was blinded by the blast, lost two of his grandparents, his father, his brother and his cousin.] 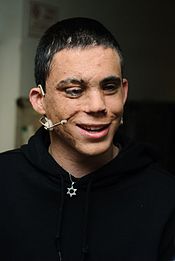