Having finished Shavuot and considered the importance of the Holy Spirit to evangelism, let’s finish the week praying for the redemption and salvation of Israel.

You will not need to fight in this battle. Position yourselves, stand still and see the salvation of the Lord, who is with you, O Judah and Jerusalem!’ Do not fear or be dismayed; tomorrow go out against them, for the Lord is with you.”

Often we think of the word “salvation” only in the context of reconciliation with God through faith in Yeshua and forgiveness of sins.

We’ve seen this Hebrew word many times.  In this verse the form is: יְשׁוּעָה [yĕshuw`ah] from the root יָשַׁע [yasha`].  The connotation of the word is “having ample space” from which we get the translations: deliverance, saved, and rescue.  It’s understandable that when we have been reconciled to God (redeemed) all these words apply.

But the biblical concept of salvation extends beyond redemption, to include deliverance (healing) of the body and the soul. Of course reconciliation and redemption is #1 priority and the only way to eternal life.

PRAY FOR THE REDEMPTION AND SALVATION OF ISRAEL.

[North to the Wilson arch and bridge is a large underground cavity called the “large hall”. Its high ceiling allows a great view of the hidden western wall.] 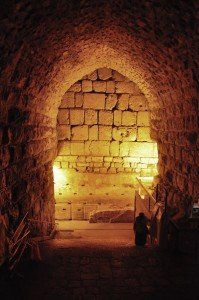