David was God’s choice to be king of Israel; he was a man “after God’s heart.”  From David would come Yeshua the Messiah.  Often Yeshua would be called, “Son of David” confirming the direct relationship.

But there was more than “just” a relationship.  In many ways David was a prophetic example of the coming Shepherd King.   Every choice of God becomes a target of Satan but no one can stop the perfect plan of God.  David was always safe.

Now the distressing spirit from the Lord came upon Saul as he sat in his house with his spear in his hand. And David was playing music with his hand. Then Saul sought to pin David to the wall with the spear, but he slipped away from Saul’s presence; and he drove the spear into the wall. So David fled and escaped that night.

Saul also sent messengers to David’s house to watch him and to kill him in the morning. And Michal, David’s wife, told him, saying, “If you do not save your life tonight, tomorrow you will be killed.” So Michal let David down through a window. And he went and fled and escaped.

[The Garden of Dreams: Festival of Lights, Jerusalem 2014] 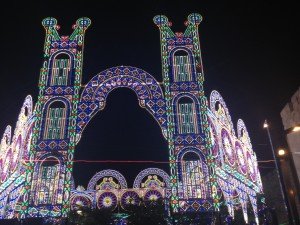 The Garden of Dreams evokes the sense of a magical floral paradise.  Entry to the installation is marked by two high towers beyond which is a great light garden whose colorful bright floral arcades seem like beautiful roses and daisies.  Made from tens of thousands LED lights.