We leave our End Times series to return to this unique day in Israel’s history…the day that BOTH Temples were destroyed and a myriad of other catastrophes occurred. God will not be mocked, and what we reap comes from what we sowed.  As we’ve heard in our End Times series, sadly the worst is yet to come.  But the good news is that God has a remnant who will turn to Him, recognize Yeshua as their Messiah, repent and be redeemed.

We can almost hear God’s heartbreak.  He questions Israel, challenging them to consider their unique privilege and relationship with Him.

Hear the word of the Lord, O house of Jacob and all the families of the house of Israel. Thus says the Lord:

“What injustice have your fathers found in Me,

That they have gone far from Me,

And have become idolaters?

Neither did they say, ‘Where is the Lord,

Who brought us up out of the land of Egypt,

Who led us through the wilderness,

Through a land of deserts and pits,

Through a land of drought and the shadow of death,

Through a land that no one crossed

And where no one dwelt?’

I brought you into a bountiful country,

To eat its fruit and its goodness.

But when you entered, you defiled My land

And made My heritage an abomination.

The priests did not say, ‘Where is the Lord?’

And those who handle the law did not know Me;

The rulers also transgressed against Me;

The prophets prophesied by Baal,

And walked after things that do not profit.

“Therefore I will yet bring charges against you,” says the Lord,

“And against your children’s children I will bring charges.

For pass beyond the coasts of Cyprus and see,

Send to Kedar and consider diligently,

And see if there has been such a thing.

Has a nation changed its gods,

Which are not gods?

But My people have changed their Glory

For what does not profit.

Be astonished, O heavens, at this,

And be horribly afraid;

Be very desolate,” says the Lord.

“For My people have committed two evils:

They have forsaken Me, the fountain of living waters,

And hewn themselves cisterns—broken cisterns that can hold no water. 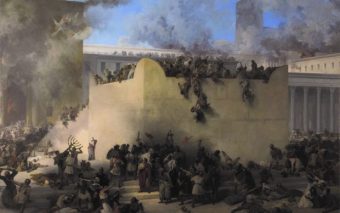