Until now, we have been laying the foundation for our journey into the End Times.  We had to define many unfamiliar terms and some basics of our world few as Jews, Gentiles and the One New Man.  Then we looked at the fulfillments of prophesy through the events that have and are taking place.

Now we are ready to open our foundational text, The Revelation of Yeshua the Messiah.

The Revelation of Jesus Christ, which God gave Him to show His servants—things which must shortly take place. And He sent and signified it by His angel to His servant John, who bore witness to the word of God, and to the testimony of Jesus Christ, to all things that he saw.  Blessed is he who reads and those who hear the words of this prophecy, and keep those things which are written in it; for the time is near.

As with most letters, it begins with John’s greeting, done in the name and for the glory of Yeshua.  Then the incredible of all privileges, John sees the glory of the Resurrected Messiah.

Then I turned to see the voice that spoke with me. And having turned I saw seven golden lampstands, and in the midst of the seven lampstands One like the Son of Man, clothed with a garment down to the feet and girded about the chest with a golden band. His head and hair were white like wool, as white as snow, and His eyes like a flame of fire; His feet were like fine brass, as if refined in a furnace, and His voice as the sound of many waters; He had in His right hand seven stars, out of His mouth went a sharp two-edged sword, and His countenance was like the sun shining in its strength.

Some people are casual about seeing Yeshua when they arrive in Heaven, but everyone in Scripture has the same response as John…a response which I am sure will be mine….I’ll be prostrate and silent.

And when I saw Him, I fell at His feet as dead. But He laid His right hand on me, saying to me, “Do not be afraid; I am the First and the Last. I am He who lives, and was dead, and behold, I am alive forevermore. Amen. And I have the keys of Hades and of Death.

And then John is given the assignment

Now we have started our journey with “that which we have seen.”

PRAY FOR ISRAEL TO HAVE EYES THAT SEE AND EARS TO HEAR THAT YESHUA IS LORD! 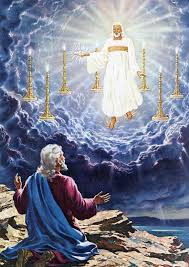