In the day that Israel repents and returns to the Lord, the land will be completely restored to fruitfulness.

Then He will give the rain for your seed with which you sow the ground,  and bread of the increase of the earth;  it will be fat and plentiful.  In that day your cattle will feed In large pastures.

Likewise the oxen and the young donkeys that work the ground Will eat cured fodder,  which has been winnowed with the shovel and fan.

There will be on every high mountain and on every high hill rivers and streams of waters,  in the day of the great slaughter, when the towers fall.

PRAY FOR THE COMPLETE RESTORATION OF ISRAEL, THE PEOPLE AND THE LAND. 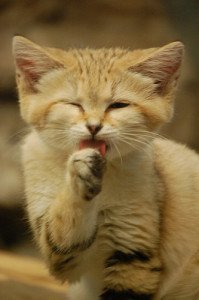 [This adorable fluffy thing is called the Sand Cat, and it is pretty rare in israel, mostly common around the Arava area. When it doesn’t use its fluffy paws to take a little bath, it mostly uses its flat head and sand colors to ambush its prey. In Hebrew: חתול חולות ]