The world is ready for someone or some organization to bring peace and security. On a global scale Satan has used political chaos, health crises, a variety of challenges from earthquakes to locusts as fodder for doubt, fear and deception.

Not surprisingly, the suggested solution is being touted and now on our horizon, is a One World Government (OWG) with its tentacles of religion and economy. All aspects of our life style, whether Western or Eastern will be impacted.  No one will be exempt from massive changes.

What is the relationship of the OWG (now being called “The Great Reset) and the Tribulation? Timing.

Remember the start of the Tribulation is when the a/c (antichrist) expands an existing covenant with Israel that will last for 7 years.  In order to do that, the antichrist will have had to rise to power during the development and institution of the OWG.

Somewhere along the line, the antichrist will make his move, the OWG will collapse and will be replaced by what the Bible calls “The Ten Toes.” The “ten toes” were first seen in the dreams of Nebuchadnezzar and as ten horns in the dreams of Belshazzar.

Daniel continues to describe the toes.

Most prophesy teachers believe these horns of the 4th Beast are the ten toes of the 4th Empire.

“After this I saw in the night visions, and behold, a fourth beast, dreadful and terrible, exceedingly strong. It had huge iron teeth; it was devouring, breaking in pieces, and trampling the residue with its feet. It was different from all the beasts that were before it, and it had ten horns.

Israel, like most nations is facing an uncertain future without a strong leader.  Scripture warns us that the deception and fear that is covering the world today will increase until even Israel will grasp and accept anyone who promises her peace and security.  Now more than ever we need to

PRAY FOR ISRAEL TO HUMBLE ITSELF AND CRY OUT TO GOD FOR DIRECTION. 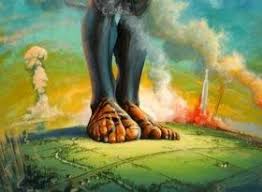