The Jewish people have been looking for their Messiah for thousands of years.  Moses and Judah Maccabee both did mighty exploits of deliverance, but still the Jews found themselves under the rule of Gentile nations.  Even today, most Jewish people do not know how to recognize God’s Messiah and thus rejected Yeshua.

The Hebrew Prophets were God’s messengers and had warned Israel (and us today) of God’s times of distress and judgement but also of the ultimate time of peace.

Behold, I will send you Elijah the prophet
Before the coming of the great and dreadful day of the Lord.
And he will turn
The hearts of the fathers to the children,
And the hearts of the children to their fathers,
Lest I come and strike the earth with a curse.”

Some did know this prophesy and thus were eager to meet the one in the wilderness.

In those days John the Baptist came preaching in the wilderness of Judea, and saying, “Repent, for the kingdom of heaven is at hand!”  For this is he who was spoken of by the prophet Isaiah, saying:

“The voice of one crying in the wilderness:
‘Prepare the way of the Lord;
Make His paths straight.’”

Later John denied that he was ‘that’ Elijah, but was the voice crying in the wilderness (Isaiah 40:3), after all he did not fulfill the ministry of Elijah.  Yeshua said that John came in the spirit of Elijah (Matthew 11:14), because Elijah was to come before Yeshua’s 2nd coming.  The fact that Elijah was with Yeshua on the Mt of Transfiguration (Luke 9:30) confirms Malachi’s prophesy will be fulfilled in the coming future!

PRAY FOR ISRAEL TO BE PREPARED TO RECOGNIZE ELIJAH WHEN HE COMES. 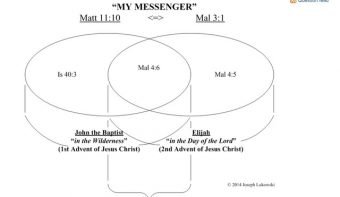