But now, thus says the Lord, who created you O Jacob, and He who formed you O Israel: fear not, for I have redeemed you: I have called you by your name, you are mine.

This passage combines God’s redemption and possession of Israel.  Actually we cannot separate the two.

We’ve seen the Hebrew word used here for redemption…ga’al.  It is the paying of a ransom by the closest relative.  Would it not be fair for the Kinsman Redeemer to expect gratitude?

So much more with God.  He did not ransom us with “stuff”, with gold or silver.  No.  The Bible says that He ransomed us, actually He purchased us with the precious blood of the Messiah Yeshua.

God claims Israel as His very own – knowing and calling her by name – as He has known and called YOU by name!

PRAY THAT EVERY JEWISH PERSON WILL HEAR AND RESPOND AS GOD CALLS THEIR NAME.

View of Jordan from Eilat 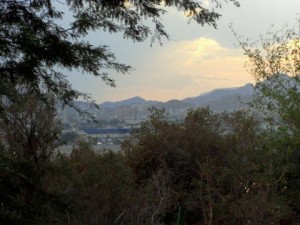