One of the saddest and most contested events since the recreation of the state of Israel was the expulsion of Jews from the Gaza strip.

One of the saddest and most contested events since the recreation of the state of Israel was the expulsion of Jews from the Gaza strip. There are still many conflicted reports and opinions even to this day. But facts on the ground cannot be contested: 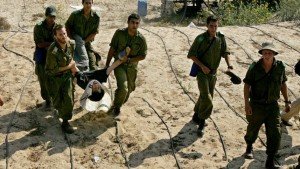 [Teams of soldiers entered the settlement of Morag Monday afternoon and began distributing eviction orders while trying to convince the settlers to leave voluntarily. Some residents are packing up their belongings, others are folding their laundry, refusing to leave, waiting for a miracle. At one point, in an emotional standoff, Colonel Erez Tzukerman, head of the Golani Brigade, hugged and cried together with the Morag settlers in an effort to persuade them to evacuate voluntarily before Wednesday, when the forced evacuation was slated to begin. “We didn’t come here to clash with you, but to offer assistance and to help you, the people we once protected and worked hand in hand with,” a teary-eyed Tzukerman called out to a crowd of several hundred anti-disengagement activists gathered at the entrance to the southern settlement.

[A young man suddenly emerged from the crowd with tears streaming down his face and called out to the senior officer, “I was an officer under your command, you taught me what it was to be an officer and protect the Israeli people. We are not your enemy but you have turned us into your enemy. Just six months ago, I was wearing an army uniform and serving side by side with you.” Tzukerman then wrapped his arms, in a tight bear hug, around the former subordinate, evoking cries of anguish and sadness from the crowd.

[Tzukerman told the crowd that he loved them and that he felt that the settlers of Morag were a part of this nation and always would be. “All of the officers are here and we are together on this day in a display of our love and affection to offer you help and assist you during this difficult time.”

[The crowd then broke out singing Hatikva and together with the soldiers sang the national anthem.]

The last Gaza settlement to be evacuated was Netzarim, on August 22. That day, residents and soldiers – some of whom had guarded over the settlers for years – prayed together in the synagogue. Then, the Torah scrolls and the menorah that had been removed from the synagogue’s roof, were carried through the streets. “The scene was reminiscent of images depicted on the Arch of Titus, which shows Romans carrying away a menorah and other booty looted from the Second Temple during the fall of Jerusalem in 70,” Haaretz reported at the time. (Credit: Reuters)

The Israeli disengagement from Gaza (Hebrew: ‫תָּכְנִית הַהִתְנַתְּקוּת, Tokhnit HaHitnatkut; in the Disengagement Plan Implementation Law), also known as “Gaza expulsion” and “Hitnatkut”, was the withdrawal of the Israeli army from Gaza, and the dismantling of all Israeli settlements in the Gaza Strip in 2005. Four small settlements in the northern West Bank were also evacuated.

The disengagement was proposed in 2003 by Prime Minister Ariel Sharon, adopted by the Government in June 2004, approved by the Knesset in February 2005 and enacted in August 2005. Those Israeli citizens who refused to accept government compensation packages and voluntarily vacate their homes prior to the August 15, 2005 deadline, were evicted by Israeli security forces over a period of several days. The eviction of all residents, demolition of the residential buildings and evacuation of associated security personnel from the Gaza Strip was completed by September 12, 2005. The eviction and dismantlement of the four settlements in the northern West Bank was completed ten days later.

[Note Ariel Sharon had a debilitating stroke 3 months after the disengagement. He remained in a vegetative state until his death almost exactly 8 years later.]

A glance from Route 4 is misleading. The red roofs of the houses make the area look like a sleepy border town surrounded by sand. But on entering the temporary housing area in Nitzan – established seven years ago to house the evacuees of Gush Katif for what was supposed to be two years – a different picture emerges. A miasma of unease and tension chokes the site. The conditions are reminiscent of the absorption camps that housed new immigrants to Israel in the 1950s.

The highway off-ramp quickly peters out into dirt roads, bordered by collapsed electricity polls and undefinable piles of debris. Improvised courtyards sprawl from mobile homes, filled with clotheslines and large, rusting containers that have been storing the families’ possessions for seven years. The houses of families that managed to leave have been removed, leaving voids filled with trash.

With no public structures – no stone building, no bench – to provide succor in the shade, the sun’s bleaching heat is inescapable. This is what ten years of transition look like.

Of the approximately 1,800 families evacuated from Gush Katif in 2005, the largest number—about 500 – are living at Nitzan. What was supposed to be a footnote in their lives has stretched into a long and ugly chapter. Over the years, the families have added makeshift rooms and other additions to their houses. There are 350 original 90-meter mobile homes and 130 more 60-meter mobile homes where the evacuees’ children live.