We continue Daniel’s prophesy of the fourth beast.  This time we focus on his eyes which indicated that the antichrist was an intellectual genius.

…that horn which had eyes…

In another of Daniel’s prophesy we see that he was capable of understanding “sinister schemes.”

“And in the latter time of their kingdom,
When the transgressors have reached their fullness,
A king shall arise,
Having fierce features,
Who understands [sinister schemes.] (NKJV)

The Hebrew word being translated as “sinister schemes” is the same word used in connection with King Solomon who, until then was considered the wisest of all men.

Now when the queen of Sheba heard of the fame of Solomon concerning the name of the Lord, she came to test him with hard questions.

The antichrist had great powers of perception and, being empowered by Satan, he had understanding of the occult.

Behold, you are wiser than Daniel!
There is no secret that can be hidden from you! 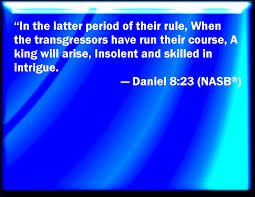