Whether John was having a vision or an actual experience, we cannot discern.  It’s a question that we can ask John personally.  Admittedly, his descriptions seem more fantastic than real.  The sights and sounds are truly out of this world which no language can possibly convey.

Let’s join John to see “the things which will take place after this.” (Revelation 1:17)

Then I saw when the Lamb broke one of the seven seals, and I heard one of the four living creatures saying as with a voice of thunder, “Come!” I looked, and behold, a white horse, and the one who sat on it had a bow; and a crown was given to him, and he went out conquering and to conquer. (NASB)

In today’s culture, a man riding on a white horse and wearing a crown would be considered a hero, a man of honor and distinction.  But this is not who this man is, he is the antichrist. Everything he does is contrary to Yeshua as he seeks to deceive and control the world.

For instance, the crown the antichrist wears is NOT like the crown of King Yeshua.

The crown given to him is not the crown of royalty, but (stephanos) the wreath given to a winner of a game of sport.  The crown worn by Yeshua when He makes His appearance is (chrysous) a golden crown.

The antichrist carries a bow reminding us of Nimrod, the first man who attempted to become a one world leader.  Nimrod was called a “Mighty hunter before the Lord.” (Genesis 10:8).  Whereas Nimrod certainly carried arrows, the antichrist will have bloodless victories, relying on diplomacy to accomplish his goals.

It is important that we prepare ourselves and others to recognize the antichrist as he will deceive many.  So let’s return to the prophesies of Daniel who best described the antichrist.

“Then the king shall do according to his own will: he shall exalt and magnify himself above every god, shall speak blasphemies against the God of gods, and shall prosper till the wrath has been accomplished; for what has been determined shall be done. He shall regard neither the God of his fathers nor the desire of women, nor regard any god; for he shall exalt himself above them all. But in their place he shall honor a god of fortresses; and a god which his fathers did not know he shall honor with gold and silver, with precious stones and pleasant things. Thus he shall act against the strongest fortresses with a foreign god, which he shall acknowledge, and advance its glory; and he shall cause them to rule over many, and divide the land for gain.

Our prayers this week will be the same…to alert people who might find themselves “left behind” to recognize and beware of the antichrist.  Of course we want to also pray people will NOT be left behind, and will make a decision for Yeshua before it’s too late. 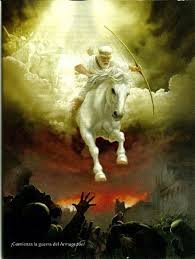