Satan has always had his minions.  The first attempt to annihilate Israel was in Egypt.  The Jewish people had come into Egypt at the invitation of the Pharaoh because of his admiration of his trusted administrator Joseph son of Jacob. Jacob’s family of 70 came into Egypt and was treated as special guests.  But…

And Joseph died, all his brothers, and all that generation. But the children of Israel were fruitful and increased abundantly, multiplied and grew exceedingly mighty; and the land was filled with them.

Now there arose a new king over Egypt, who did not know Joseph. And he said to his people, “Look, the people of the children of Israel are more and mightier than we; come, let us deal shrewdly with them, lest they multiply, and it happen, in the event of war, that they also join our enemies and fight against us, and so go up out of the land.” Therefore they set taskmasters over them to afflict them with their burdens. And they built for Pharaoh supply cities, Pithom and Raamses. But the more they afflicted them, the more they multiplied and grew. And they were in dread of the children of Israel. So the Egyptians made the children of Israel serve with rigor. And they made their lives bitter with hard bondage—in mortar, in brick, and in all manner of service in the field. All their service in which they made them serve was with rigor.

Then the king of Egypt spoke to the Hebrew midwives, of whom the name of one was Shiphrah and the name of the other Puah; and he said, “When you do the duties of a midwife for the Hebrew women, and see them on the birth stools, if it is a son, then you shall kill him; but if it is a daughter, then she shall live.”

But the midwives feared God and spared the Jewish children.  One of those children was Moses who eventually led Jacob’s family – now the nation of Israel – out of Egypt and to the land promised to them by God.

PRAISE GOD FOR HIS PROTECTION OF ISRAEL DESPITE THE MANY ATTEMPTS AGAINST HER. 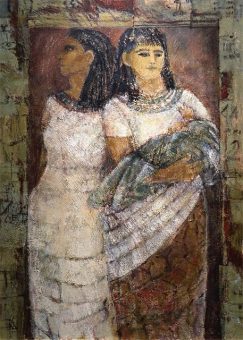