Much of God’s prophetic blessing to Iran (part of ancient Elam) has been fulfilled in recent history. God’s blessing has not and will not involve Israel but was directed solely to Elam.

Unlike most other Gentile nations, Elam has been a blessing to Israel:

Today there is a vibrant revival in Iran with many of the new Believers sharing God’s love for Israel.

The word of the Lord that came to Jeremiah the prophet against Elam, in the beginning of the reign of Zedekiah king of Judah, saying, Thus says the Lord of hosts:

‘Behold, I will break the bow of Elam,
The foremost of their might.
Against Elam I will bring the four winds
From the four quarters of heaven,
And scatter them toward all those winds;
There shall be no nations where the outcasts of Elam will not go.

For I will cause Elam to be dismayed before their enemies
And before those who seek their life.
I will bring disaster upon them,
My fierce anger,’ says the Lord;
‘And I will send the sword after them
Until I have consumed them. I will set My throne in Elam,
And will destroy from there the king and the princes,’ says the Lord.

‘But it shall come to pass in the latter days:
I will bring back the captives of Elam,’ says the Lord.”

PRAY FOR THE REVIVAL AND AN INCREASE OF UNDERSTANDING AND SHARING  GOD’S LOVE FOR ISRAEL. 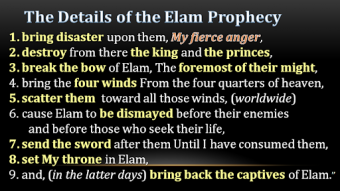