The nations have tried to destroy Israel even before God created her as a nation.  In 135 AD, after winning the second Jewish/Roman War, Rome tried to erase even the name of the nation from history.

The Roman conquerors changed the name of Judea to: Syria Philistia (from where we get the name “Palestine”.

There is much in this Psalm that has not been fulfilled, leading many to believe it’s a prophesy to be fulfilled in “end times.”

Rome was unsuccessful because God has restored the names of Israel and Jerusalem as He is restoring the land and the people!

Do not keep silent, O God!
Do not hold Your peace,
And do not be still, O God!
For behold, Your enemies make a tumult;
And those who hate You have lifted up their head.
They have taken crafty counsel against Your people,
And consulted together against Your sheltered ones.
They have said, “Come, and let us cut them off from being a nation,
That the name of Israel may be remembered no more.”

For they have consulted together with one consent;
They form a confederacy against You:
The tents of Edom and the Ishmaelites;
Moab and the Hagrites;
Gebal, Ammon, and Amalek;
Philistia with the inhabitants of Tyre;
Assyria also has joined with them;
They have helped the children of Lot. Selah

Deal with them as with Midian,
As with Sisera,
As with Jabin at the Brook Kishon,
Who perished at En Dor,
Who became as refuse on the earth.

Make their nobles like Oreb and like Zeeb,
Yes, all their princes like Zebah and Zalmunna,
Who said, “Let us take for ourselves
The pastures of God for a possession.”

O my God, make them like the whirling dust,
Like the chaff before the wind!
As the fire burns the woods,
And as the flame sets the mountains on fire,
So pursue them with Your tempest,
And frighten them with Your storm.
Fill their faces with shame,
That they may seek Your name, O Lord.
Let them be confounded and dismayed forever;
Yes, let them be put to shame and perish,
That they may know that You, whose name alone is the Lord,
Are the Most High over all the earth.

PRAY THAT ALL NATIONS WILL UNDERSTAND THAT GOD’S RELATIONSHIP WITH THE PEOPLE AND THE LAND WILL NEVER CEASE. 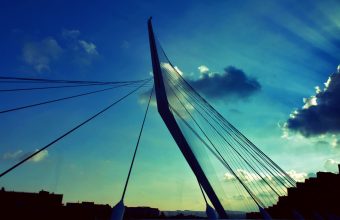