From the time Joseph was taken to Egypt there has been a complicated relationship between Israel and Egypt.  Israel spent 430 years in bondage to Egypt, then God delivered Israel at the cost of bringing death, devastation and destruction to Egypt.  Yet, over the years, Israel often turned to Egypt when in need rather than turning to God.

Scripture is replete with God’s warnings to Egypt, but ultimately Egypt is one of three nations God’s specifically blesses!

In that day five cities in the land of Egypt will speak the language of Canaan and swear by the Lord of hosts; one will be called the City of Destruction.

PRAY FOR THE CHURCH IN EGYPT TO REACH THE NATION WITH THE GOSPEL AND A LOVE FOR ISRAEL. 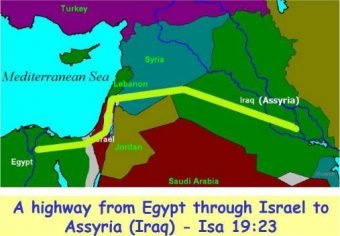