God chose a specific city upon which He would place His name – Jerusalem.   The Jewish people were to steward the land preparing it for the coming of Jesus, Yeshua the Messiah.  The history of Israel including the birth, life, death and return of Jesus cannot be separated from Jerusalem.  One day God expects all flesh to come to Jerusalem to worship King Jesus and celebrate the Feast of Tabernacles.

Then all the tribes of Israel came to David at Hebron and spoke, saying, “Indeed we are your bone and your flesh.  Also, in time past, when Saul was king over us, you were the one who led Israel out and brought them in; and the Lord said to you, ‘You shall shepherd My people Israel, and be ruler over Israel.’” Therefore all the elders of Israel came to the king at Hebron, and King David made a covenant with them at Hebron before the Lord. And they anointed David king over Israel.  David was thirty years old when he began to reign, and he reigned forty years.  In Hebron he reigned over Judah seven years and six months, and in Jerusalem he reigned thirty-three years over all Israel and Judah.

And the king and his men went to Jerusalem against the Jebusites, the inhabitants of the land, who spoke to David, saying, “You shall not come in here; but the blind and the lame will repel you,” thinking, “David cannot come in here.”  Nevertheless David took the stronghold of Zion (that is, the City of David).

Now David said on that day, “Whoever climbs up by way of the water shaft and defeats the Jebusites (the lame and the blind, who are hated by David’s soul), he shall be chief and captain.” Therefore they say, “The blind and the lame shall not come into the house.”

Then David dwelt in the stronghold, and called it the City of David. And David built all around from the Millo and inward. 10 So David went on and became great, and the Lord God of hosts was with him.

Then Hiram king of Tyre sent messengers to David, and cedar trees, and carpenters and masons. And they built David a house.  So David knew that the Lord had established him as king over Israel, and that He had exalted His kingdom for the sake of His people Israel.  (2 Samuel 5:1-12 NKJV)

This 15 acre [6 ha.] ancient core of Jerusalem is located between the Kidron and the Central Valleys (in the shade on the right [east] and left [west] of the core).  It is situated here because of its nearness to the Gihon Spring. 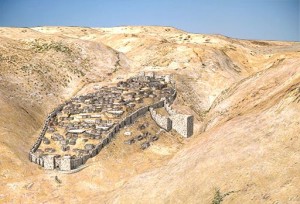 (Rendering of ancient City of David) 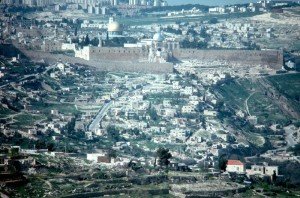 On the upper left side of the image is the “Golden” Dome of the Dome of the Rock. South of this, above the center of the image is the “Silver” dome of the el-Aqsa Mosque (now black). Below the el-Aqsa Mosque is the southern wall of the Old City of Jerusalem. Sloping down, in the direction of the viewer is a long sunlit area that is the Old Ancient Core of Jerusalem – the city that David Captured.

This Old Core is bounded on the left (west) by the paved road that basically follows the line of the “Central Valley.” In ancient times the valley floor was probably 60 ft. below the current ground level.

The holiday of Hanukkah is an appropriate time to announce the discovery of a Hasmonean-period building in Jerusalem. The structure is located in the Central Valley just south of the Dung Gate in the former Givati parking lot. The Israel Antiquities Authority describes the find in a press release.

In recent months remains of an impressive building from the Hasmonean period (second century BCE) are being unearthed in excavations the Israel Antiquities Authority is directing in the Giv‘ati parking lot, located in the City of David in the Walls Around Jerusalem National Park. The excavations are sponsored by the “Friends of City of David”.

The building stands c. 4 meters high and covers an area of c. 64 sq. m. The building’s broad walls (more than one meter thick) are made of roughly hewn limestone blocks that were arranged as headers and stretchers, a construction method characteristic of the Hasmonean period.

Although numerous pottery vessels were discovered inside the building, it was mainly the coins that surprised the researchers. These indicated the structure was erected in the early second century BCE and continued into the Hasmonean period, during which time significant changes were made inside it.

According to Dr. Doron Ben Ami and Yana Tchekhanovets, the excavation directors on behalf to the Israel Antiquities Authority, “The importance of this discovery is primarily because of the conspicuous paucity of buildings from the Hasmonean city of Jerusalem in archaeological research, despite the many excavations that have been conducted to date. Apart from several remains of the city’s fortifications that were discovered in different parts of Jerusalem, as well as pottery and other small finds, none of the Hasmonean city’s buildings have been uncovered so far, and this discovery bridges a certain gap in Jerusalem’s settlement sequence. The Hasmonean city, which is well-known to us from the historical descriptions that appear in the works of Josephus, has suddenly acquired tangible expression”. 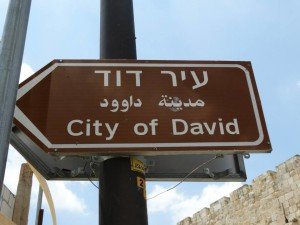