From Refugee to Daughter of the King.

I was born in post-WWII Germany in 1947 in a refugee camp to Holocaust surviving parents who were born in Poland. All my mother’s family were murdered by the Nazis, and all, except one brother who immigrated to Palestine before the war, were also killed in the Holocaust. After the war, homeless and without possessions, the Jewish Agency took them (separately, they didn’t know each other then) along with other displaced Jewish refugees to a refugee camp in Germany. My parents got married in the camp and there I was born in 1947.

Given a choice between going to America or Israel, that was soon to become a state, my parents chose to live in the Land of the Jews – no more persecution, no more wondering from place to place, no more holocaust – that was the refugees’ hope.

We were loaded up on one of those old boats filled with numerous other refugees, waiting at the Haifa port to be allowed entry into Israel. In May 1948, Israel gained her independence and we were allowed to make “Aliya” (immigrating to Israel).

We were given an Arab deserted house at an Arab ghost town near Lod called Ramla. Even with the hardships and daily survival battle of living in a new land, It was interesting growing up with the State of Israel.

I was a very outgoing, talented little girl, and excelled in almost everything; reading, drawing, dancing and singing. I wanted to be a ballerina at the age of 5, but didn’t get much encouragement from my parents, because we were a very poor family of six. One night (I was 8) we moved to the poor area of South Tel-Aviv without preparing us, kids for the move. I became despondent in the new place, often gazing at the window of the classroom – it took me a long time to adjust, I was no longer the center of attention and became very introverted and shy.

I liked to learn in school, especially reading and languish. I loved the Bible stories as literature and distant history of the nation I belonged to. However, I decided that the God of the Bible they believed in did not really exist.

However, I admired my forefathers’ wisdom and courage. I thought that the Jewish religion was the best, most decent and fair of all religions. Growing up in a poor family forced me to go to work right after elementary school, but because I wanted education I went to evening high school with the ambition to became a writer or journalist, but gave up that “dream” after two years of study, and settled for a career of Architectural drafting, after finishing a short course in technical school. I loved reading American novels, I imagined myself living there in luxury, so when my boyfriend invited me to come to America, I jumped on the first plane (my first time at the age of 19) and arrived in Los Angeles, California – I thought was “the Promised Land.”

I did not live happily ever after. I wasn’t happy, not in America, not in my marriage and not with myself. Actually, being happy became the primary goal in my life. I had everything, a big beautiful house with a swimming pool, a live-in maid to clean and help take care of our two little sweet children, money to buy whatever I wanted, an active social life, a Cadillac and trips to exotic places around the world, a dream life for anyone, but I wasn’t happy. I didn’t value myself and was dependent on people to validate me and my abilities. I turned to the God of Abraham, Isaac and Jacob, with hunger and burning desire to know Him – I had to know if He existed – I had to know if He is the true God. I was seeking Him with all my heart, and did not let go until He showed me through a series of events that He was real. I knew they were not mere coincidental acts; God of the Bible is the true and living God.

I had many questions, and talked to Rabbis and experts in Judaism to find answers. They didn’t satisfy me, and deep inside I still felt the nagging push to find happiness – something was missing at the center of my being and I didn’t know what it was. Even though I had revelation of Him, I did not feel right with God.

Reading the Hebrew Bible was very difficult because of the biblical Hebrew language, and I often found myself frustrated, not understanding, especially the Prophets. Until one day I picked up an English Gideons Bible from a hotel room and took it home. My initial desire was to read an easier version to try to understand the Tanach better, but to my surprise there were more writings at the end of the Bible: Matthew, Mark, Luke, John…I knew instinctively that they were the New Testament books. I had never read them because I was taught they were the Christian books of the Gentiles, and that they were anti-Semitic. That Yeshu (I never knew His real name – Yeshua, which means Salvation), But when I started reading the first book – Matthew, from the very first few verses I was fascinated and surprised to find out how Jewish and Israeli it was. His genealogy – from the house of David, His parents – devoted Jews who believed in the God of Abraham, Isaac and Jacob, kept the Law of Mosses and celebrated all the Jewish holidays. Most of all, I was impressed with the character of Yeshua (Jesus), He wasn’t at all like I was thought. I sensed as if He spoke directly to me, and felt His love and acceptance. His honesty won my heart – He was strong yet gentle, loving and wise. But I couldn’t agree that He was the Son of God. Was He the long awaited Messiah of Israel or the “God of the Gentiles”?

The more I studied about Yeshua and the way to salvation, God was pulling my heart and also showing me I was a sinner, and that only thru His atonement in Yeshua I can become right with Him. – I started seeing myself the way God saw me – a sinner. All my “goodness and righteousness” were like “filthy rags in His sight” (Isaiah 64: 6). I saw everything I did to others from God’s perspective, that I was not as good as I thought I was. With this, I felt His great love and mercy; I wanted so much to be pleasing in His sight.

Believers in Yeshua started to come into my life and affirm what God was already showing me, and from hearing radio and television Christian programs I knew in my heart that Yeshua was the Messiah and savior of Israel and the world.

A few times I found myself on my knees, confessing my sins and asking Yeshua into my heart and save me. But the next day I would sink into despair and fear:  “What have I done, I was probably hypnotized into becoming a Christian!” I spent many hours crying out to the God of Abraham, Isaac and Jacob, my God, to show me once and for all if Yeshua was truly the Jewish Messiah, His son – I will believe only Him and not any man. One day, while I was lamenting about it, I felt of sudden as sense of peace in my soul, quiet in my mind – all my thoughts and feeling came to a halt. A still small inner voice said: “Get up and open the Bible and where you open it you will have the answer.” I knew God was directing me and in much excitement and expectation I got up and opened the Bible with my eyes closed, and when I opened them they fell on His words from Isaiah 53: 5, 6, 8 … “He was wounded for our transgressions and was bruised for our sins…We all like sheep have gone astray each one to his own way, yet God laid on Him the iniquity of us all…stricken for the transgression of my people, says the Lord…”

That was in 1984. Many years past, my life changed because I have changed from the inside. My faith life grew and developed. I have been through a lot, there were many ups and downs, there were difficulties and downfalls, and there were victories and achievements in my faith life and my earthly life. Yet through it all, I never doubted Yeshua’s love, He has filled me with His Spirit and given me peace and joy that are incomprehensible.

“In the world you’ll have tribulations” Yeshua said in the book of Yohanan (John) 16: 33, “but be of good cheer because I have overcome the world”. Yes, through faith in Yeshua I can truly say that I am happy, independent of circumstances or human beings.

Through Yeshua I grew in knowledge of God, I have turned away from my old sinful life, have repented and given Him my heart and life and in turn He has changed me in monumental ways.

In 1996 I returned to Israel and have been living in the Land ever since. Today I am experiencing God’s many blessings; a beautiful home full of love, peace, joy and happiness. God has blessed me with a Godly husband who loves Yeshua and loves me with a Godly love. All my needs are met and I lack no good thing. Above all, I have right standing relationship with my God, My Lord and Savior – I truly can say that I have never been happier in my life.

I Thank God everyday for His mercies and goodness. I pray that all of Israel will come to know and accept His Messiah Yeshua and experience His great blessings. 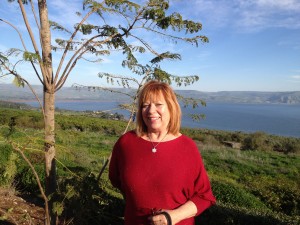 One thought on “Bella – Hebrew Translator”