He shall send from heaven and save me;  He reproaches the one who would swallow me up. Selah.  God shall send forth His mercy and His truth.

For God so loved the world that He gave His only begotten Son, that whoever believes in Him should not perish but have everlasting life.

The Psalmist knew that his redemption and salvation could only come from God, that God would do whatever necessary.  In fact, as He promised God did – giving Himself, sending His Son.

PRAY FOR THE SALVATION AND REDEMPTION OF ISRAEL.

[Shaul Golan took a photograph of Sgt.-Maj. (res.) Adi Briga as he was washing his face using water from a container that he drove near Kibbutz Be’eri. Briga told him that he was anticipating seeing his girlfriend, whom he had not seen for two weeks.  Later that day, Golan noticed a couple embraced in a kiss. He noticed it was Briga and his girlfriend. This past Monday, Briga was killed near that same water container.] 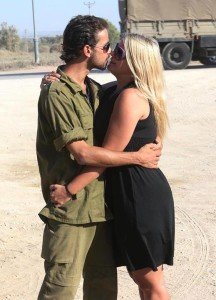