We’ve seen that the Apostles had different perspectives as they recorded Yeshua’s answer about the “signs” of the future destruction of the Temple.

Matthew and Mark said, “These are the beginning of sorrows,”

All these are the beginning of sorrows.

These are the beginnings of sorrows.

Luke not only had a different perspective, he was recording a prophesy that has more than one fulfillment, a term called “double reference.”

12 But before all these things….

As the Hebrew prophet Daniel prophesied, the existing Temple would be destroyed.  That destruction happened about 40 years later, on April 14, 70 AD (three days before Passover) by the Roman army under Titus. Every detail was completely fulfilled as the soldiers completely ravished the city, making sure that they got every bit of gold from between the huge stones.

“And the people of the prince who is to come
Shall destroy the city and the sanctuary.
The end of it shall be with a flood,
And till the end of the war desolations are determined.”

Who were the people who destroyed the Temple, the people of the prince to come?  They weren’t all Roman.  The Roman army consisted of mercenaries throughout the empire, including a legion from Macedonia. The Hebrew prophets tell about another Assyrian who will try to devastate Israel. 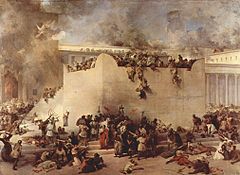