Sadly, the story of Jehoshaphat didn’t end well.  While he lived a life faithful to God, he did not cleanse the land from false worship which defiled the land and the people.

So Jehoshaphat was king over Judah. He was thirty-five years old when he became king, and he reigned twenty-five years in Jerusalem. His mother’s name was Azubah the daughter of Shilhi.  And he walked in the way of his father Asa, and did not turn aside from it, doing what was right in the sight of the Lord.  Nevertheless the high places were not taken away, for as yet the people had not directed their hearts to the God of their fathers.

Today, not only does the leadership of Israel allow false worship, but they “tolerate” the worst sins as the do the nations.  God will soon have to bring judgement on His beloved land.

PRAY FOR A SPIRITUAL REVIVAL THROUGHOUT ISRAEL STARTING WITH HER LEADERS. 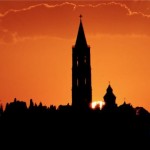