Since that time, the land has been an issue of contention between Israel and the nations.

Prayers for and by Israel often reflect this special relationship between God, the people and the land.

God had expelled the Jews from the land, but with the promise that He would bring them back. Like Nehemiah, some stayed.

The words of Nehemiah the son of Hachaliah.

It came to pass in the month of Chislev, in the twentieth year, as I was in Shushan the citadel, that Hanani one of my brethren came with men from Judah; and I asked them concerning the Jews who had escaped, who had survived the captivity, and concerning Jerusalem.  And they said to me, “The survivors who are left from the captivity in the province are there in great distress and reproach. The wall of Jerusalem is also broken down, and its gates are burned with fire.”

So it was, when I heard these words, that I sat down and wept, and mourned for many days; I was fasting and praying before the God of heaven

One of the persistent lies of the enemy attacks Israel’s right to possess her promised possession.

The entitlement of any one ethnic or religious group to territory in the Middle East called the “Holy Land” cannot be supported by Scripture.  In fact, the land promises specific to Israel in the Old Testament were fulfilled under Joshua. (Knox Seminary, Open Letter to Evangelicals.)

Replace with the truth

TRUTH: The measurements of the land that God promised to Abraham, Isaac, Jacob and David have not yet been fulfilled.

PRAY: I will appoint a place for My people Israel, and will plant them, that they may dwell in a place of their own and move no more; nor shall the sons of wickedness oppress them anymore, as previously, since the time that I commanded judges to be over My people Israel, and have caused you to rest from all your enemies. Also the Lord tells you that He will make you a house. (2 Samuel 7:10-11) 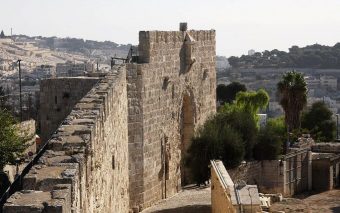