Wars and Rumors of Wars

Biblical prophecies are usually fulfilled in several layers of time.  The technical term is: “The Principle of Double Reference.” This was true of Daniel’s prophesies (9:24-11) that we talked about before.

Yeshua prophesy of the destruction of the Temple would be fulfilled about 40 years later, in 40 CE (AD); the deceptions started almost immediately after His death and will continue until the end of the Tribulation.

Likewise, the next “signs” would likewise take place almost immediately and all the way through today and tomorrow. Furthermore, these “signs” would apply to the world, to those who believe in Him, and just to the Jewish people.

Israel has never been a stranger to wars and rumors of wars. Yeshua is assuring them that first they will just “hear” of wars and not be a participant.  Since the reestablishment of Israel in 1948, she has fought 8 wars, and multiple terror attacks and border uprisings!

While Yeshua warned that what is coming will instill fear and hopelessness beyond anything that they have ever known, He was giving them assurance that He was sovereign even despite the difficulties ahead.

“And you will hear of wars and rumors of wars. See that you are not troubled; for all these things must come to pass, but the end is not yet.”

“But when you hear of wars and rumors of wars, do not be troubled; for such things must happen, but the end is not yet.”

And still the end was not imminent.

PRAY FOR OPPORTUNITIES TO SHARE AND EXPLAIN BIBLICAL PROPHESY TO JEWISH PEOPLE. 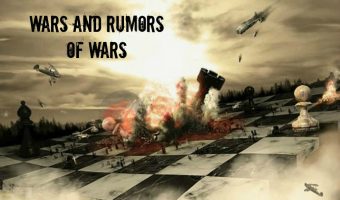