God speaks very severely against false teachers, those who satisfy the “itchy ears” of the hearers instead of bringing the truth.  Today these false teachers can be found in huge churches, small congregations and throughout the internet.  They rarely speak from the Bible and when they do, they pervert the literal meaning by bringing an interpretation that will make the people feel good rather than challenge, exhort and encourage the people to seek God’s righteousness.

But there were also false prophets among the people, even as there will be false teachers among you, who will secretly bring in destructive heresies, even denying the Lord who bought them, and bring on themselves swift destruction.  And many will follow their destructive ways, because of whom the way of truth will be blasphemed.

The apostasy (abandonment of foundational principles of faith) resulting from false teaching is one of the most prevalent and dangerous signs of the end times today.

Now the Spirit expressly says that in latter times some will depart from the faith, giving heed to deceiving spirits and doctrines of demons, speaking lies in hypocrisy, having their own conscience seared with a hot iron, forbidding to marry, and commanding to abstain from foods which God created to be received with thanksgiving by those who believe and know the truth. For every creature of God is good, and nothing is to be refused if it is received with thanksgiving; for it is sanctified by the word of God and prayer.

These false teachers not only deceive people by incorrect interpretation of God’s word, but they also put them into the bondage of “false religion”…full of do’s and don’ts.  These man-made regulations chase people away from an intimate relationship with the God they think they are worshipping.

PRAY ALL APOSTASY AND FALSE TEACHERS WILL BE EXPOSED. 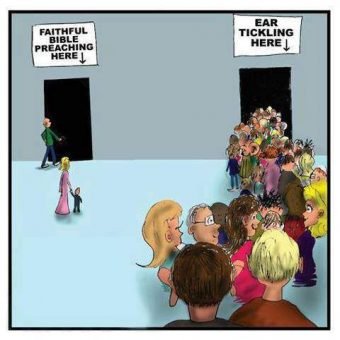