The Psalmist describes the Lord God of Israel as a shepherd, He calls us His flock.  David’s years as a shepherd, was God’s training for him to become king of Judah.

The Lord is my shepherd;
I shall not want.

And the word of the Lord came to me, saying, “Son of man, prophesy against the shepherds of Israel, prophesy and say to them, ‘Thus says the Lord God to the shepherds: “Woe to the shepherds of Israel who feed themselves! Should not the shepherds feed the flocks?  You eat the fat and clothe yourselves with the wool; you slaughter the fatlings, but you do not feed the flock.  The weak you have not strengthened, nor have you healed those who were sick, nor bound up the broken, nor brought back what was driven away, nor sought what was lost; but with force and cruelty you have ruled them.”

Thus God assured Israel that He was their good shepherd.

“You are My flock, the flock of My pasture; you are men, and I am your God,” says the Lord God.

God’s promise to Israel was fulfilled in Yeshua.

He answered and said, “I was not sent except to the lost sheep of the house of Israel.”

The ultimate act of love was the Good Shepherd giving His life for the salvation of His sheep.

“I am the good shepherd. The good shepherd gives His life for the sheep.  But a hireling, he who is not the shepherd, one who does not own the sheep, sees the wolf coming and leaves the sheep and flees; and the wolf catches the sheep and scatters them.  The hireling flees because he is a hireling and does not care about the sheep.  I am the good shepherd; and I know My sheep, and am known by My own.  As the Father knows Me, even so I know the Father; and I lay down My life for the sheep.  And other sheep I have which are not of this fold; them also I must bring, and they will hear My voice; and there will be one flock and one shepherd.

PRAY FOR THE LOST SHEEP OF ISRAEL FOR WHOM YESHUA CAME TO SEEK AND SAVE. 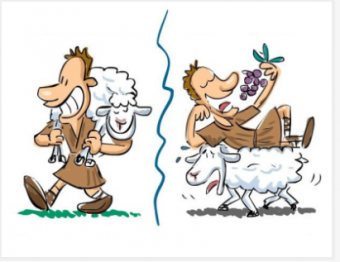