We have just finished the holiday of Tisha B’Av which commemorates the destruction of BOTH of Israel’s Temples.  It is a time of great mourning even as the Jews hold onto God’s promise to build another Temple.

We will now look at the danger that faced Jehoshaphat.  What happened then is an important lesson for the leaders of Israel and the nations that are threatening her today.

It happened after this that the people of Moab with the people of Ammon, and others with them besides the Ammonites, came to battle against Jehoshaphat. Then some came and told Jehoshaphat, saying, “A great multitude is coming against you from beyond the sea, from Syria; and they are in Hazazon Tamar” (which is En Gedi).

And Jehoshaphat feared, and set himself to seek the Lord, and proclaimed a fast throughout all Judah. So Judah gathered together to ask help from the Lord; and from all the cities of Judah they came to seek the Lord.

PRAY THAT ISRAEL’S LEADERS WILL SET THEMSELVES TO SEEK THE LORD AS THE NATIONS ARE AGAIN THREATENING HER EXISTENCE. 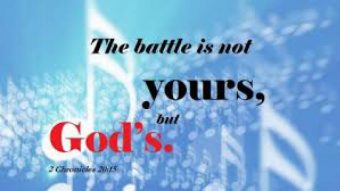