There is one more Temple that we need to consider, the Temple that will be built during the 1000 years of the Messianic Kingdom, when Messiah Yeshua will rule and reign from Jerusalem.

When the second Temple was finished, those who remembered Solomon’s Temple were disappointed, but God promised them that something better was to come:

In the seventh month, on the twenty-first of the month, the word of the Lord came by Haggai the prophet, saying: 2 “Speak now to Zerubbabel the son of Shealtiel, governor of Judah, and to Joshua the son of Jehozadak, the high priest, and to the remnant of the people, saying:

‘Who is left among you who saw this temple in its former glory? And how do you see it now? In comparison with it, is this not in your eyes as nothing?

Many people believe this final temple will be erected according to the details given to the prophet Ezekiel.

10 “Son of man, describe the temple to the house of Israel, that they may be ashamed of their iniquities; and let them measure the pattern.

In that day all the nations will come to Jerusalem, to the Temple

The word that Isaiah the son of Amoz saw concerning Judah and Jerusalem.

Now it shall come to pass in the latter days
That the mountain of the Lord’s house
Shall be established on the top of the mountains,
And shall be exalted above the hills;
And all nations shall flow to it. Many people shall come and say,
“Come, and let us go up to the mountain of the Lord,
To the house of the God of Jacob;
He will teach us His ways,
And we shall walk in His paths.”
For out of Zion shall go forth the law,
And the word of the Lord from Jerusalem.

This will be the final Temple as there is no need for another Temple in God’s everlasting Kingdom.

Now I saw a new heaven and a new earth, for the first heaven and the first earth had passed away. Also there was no more sea.

2 Then I, John, saw the holy city, New Jerusalem, coming down out of heaven from God, prepared as a bride adorned for her husband.

3 And I heard a loud voice from heaven saying, “Behold, the tabernacle of God is with men, and He will dwell with them, and they shall be His people. God Himself will be with them and be their God.

9 Then one of the seven angels who had the seven bowls filled with the seven last plagues came to me and talked with me, saying, “Come, I will show you the bride, the Lamb’s wife.” 10 And he carried me away in the Spirit to a great and high mountain, and showed me the great city, the holy Jerusalem, descending out of heaven from God.

22 But I saw no temple in it, for the Lord God Almighty and the Lamb are its temple. 23 The city had no need of the sun or of the moon to shine in it, for the glory of God illuminated it. The Lamb is its light.

PRAY FOR THE REMNANT OF ISRAEL TO HEAR AND RESPOND TO THE GOSPEL OF TRUTH, PEACE AND REDEMPTION. 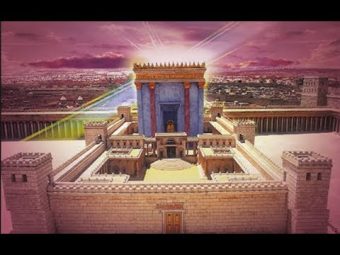