The Temple of the anti-Messiah

Daniel’s vision of the future was not totally fulfilled by Antiochus IV.  The prophesy will only be fulfilled by the one called “the Man of Sin” or the anti-Messiah during the 70th week of Daniel (again here referred to as “he.”)

The end of it shall be with a flood,
And till the end of the war desolations are determined.
27 Then he shall confirm a covenant with many for one week;

But in the middle of the week
He shall bring an end to sacrifice and offering.

And on the wing of abominations shall be one who makes desolate, even until the consummation, which is determined,
Is poured out on the desolate.”

The Man of Sin will strengthen an existing covenant with Israel to last for 7 years.  After 3.5 years, he will break the covenant putting an end to sacrifices and offerings.

Obviously this means that after the destruction of Herod’s Temple, there will be another Temple which will be existing at the time of this new covenant.

As of today, Israel is ready to build this third temple but has no access to the Temple Mount.  It is said, that it would be built and be fully operational (including the priesthood) in less than 48 hours.

This last detail gives us another clue to our timeline.

“And from the time that the daily sacrifice is taken away, and the abomination of desolation is set up, there shall be one thousand two hundred and ninety days.

This third temple will be defiled by the anti-Messiah and eventually destroyed at the hand of God.

For more information on the timing of Daniel’s visions: 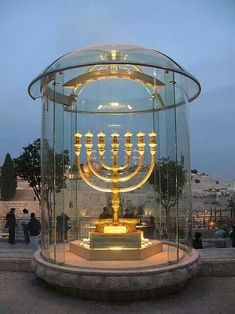 Menorah for the Third Temple